Join our FREE Investing in Real Estate Class Sign Me Up

Is a Whole Foods, New Seasons, or Trader Joe’s store going in down the street from you? Look forward to an increase in the value of your home.

Zillow details a few takeaways from their 2016 research into the relationship between organic grocers and home prices:

The effect is variably called the Whole Foods Effect, the Wal-Mart Effect, and the Starbucks Effect; however, we’re in Portland, so we’ll call it the Organic Grocery Effect. Whatever you want to call it, Devon Thorsby of US News explains how it works:

When (insert popular retailer here) moves into or near your neighborhood, you can expect to see your home’s property value increase at a higher rate than usual because people want easy access to their favorite place to shop or stop for coffee…

Any major retailer considers several factors before choosing a new location – not only the right size space, but also the cost to rent or build in the area, whether there is an abundance of existing clientele and the potential to reach a wider customer base…

And when a retailer decides to open a new location in an area undergoing widespread changes, it becomes an investment for future customers years down the road. In 2013, Whole Foods opened a location in downtown Detroit, the first national grocery store chain to open in the city in more than a decade. In the same ZIP code as the Detroit Whole Foods, median home sales went from $19,000 in 2009 to $80,000 in 2015, according to a report by the Detroit Free Press.

The same analysis found the median home price citywide had quadrupled in that time period, as American and international investors bought up commercial property, more local businesses opened up and other businesses relocated or expanded operations within Detroit’s city limits. Clearly, more is going on in the city than the opening of a Whole Foods to bring about the change in property values, but a Whole Foods opening could be considered a noted shift in more widely recognized brands operating in the city.

However, don’t rush to sell your house the moment you see the construction sign go up – research shows that the Effect is not immediate, and Zillow’s data backs that up: 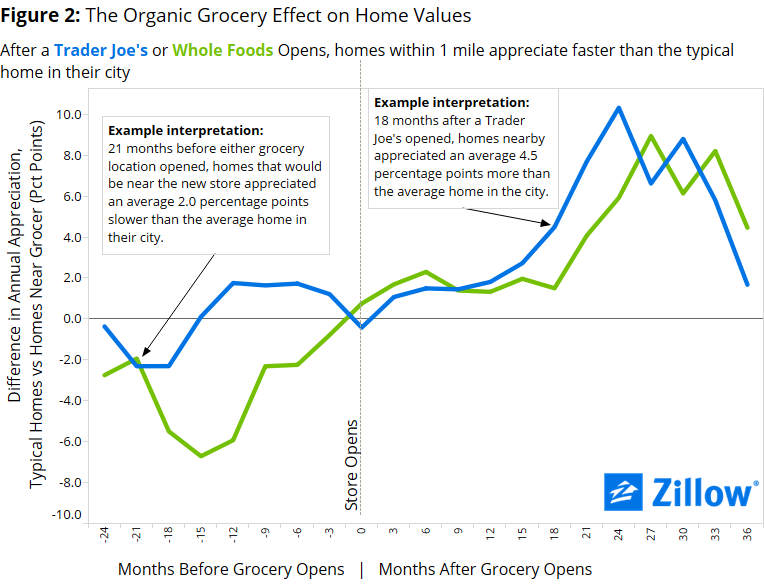 Whether the construction is underway for a new grocery store in your neighborhood – or if you want to trade in your current home for one closer to your market of choice – the experienced professionals of the SellPDX team are here to help.

Advice, Opinions, and Market Reports about the Oregon and Washington Real Estate Market

2020 was a rough year with the pandemic, social unrest, and the closure of many restaurants and retail businesses. Nowhere was the impact more acute than in downtown urban areas across the country. Read the full  luxury condo report here to view the pre and post...

How To Buy & Sell at the Same Time

How to buy a home when you already own a home: Have you been dreaming of your next home, but you’re not sure what to do with your current home? You’ve heard that it’s a sellers market, but what does that mean if you also need to buy?  There are three options to...

How To Retire for Real Estate Agents

Our CEO and Best Selling Author of The Golden Handoff, Nick Krautter, talks with Justin Stoddart on the Think Bigger Real Estate Show to review his revolutionary model that helps real estate agents grow their business while simultaneously helping other agents rapidly...